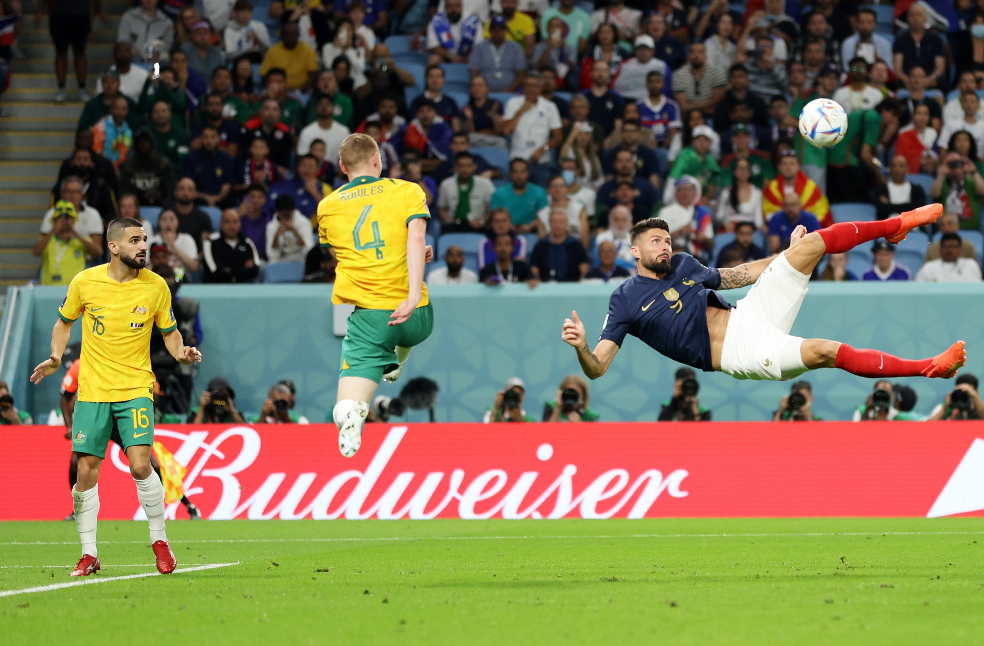 Craig Goodwin side-footed the ball into the top corner as the Socceroos of Australia stunned the world champions with a goal in the ninth minute. The French team was undoubtedly inspired by Saudi Arabia’s shocking victory over Argentina.

France could not have gotten off to a worse start, as French fullback Lucas Hernandez limped off after being injured while attempting to block the cross that led to the opening goal.

Five minutes later, with slightly more than thirty minutes remaining on the clock, Giroud, who at 36 became France’s oldest player in World Cup history, was left with a nearly empty net due to an excellent French press.

Jackson Irvine’s chance in the final seconds of the first half, which came against the flow of play, hit the crossbar, warning a French squad at risk of complacency.

France maintained its superiority in the second half. Australia provided a threat on the counterattack, but by sitting deep, they welcomed pressure.

The Socceroos defended magnificently to prevent Antoine Griezmann’s shot from crossing the goal line, but they could not prevent Kylian Mbappe from scoring with his head in the 67th minute. Mbappe broke down the left flank and sent a cross that Giroud headed in for France’s fourth goal five minutes later.

Giroud now has 51 goals for France, which is the same number as Thierry Henry. He was in the starting lineup because Ballon d’Or winner Karim Benzema is hurt and will miss the whole World Cup.

Before the first game, midfielders N’Golo Kante and Paul Pogba and forward Christopher Nkunku were also ruled out. French coach Didier Deschamps was saddened by the injury to Lucas Hernandez.

Deschamps said to the media that, “He needs to do some tests, but it seems pretty serious. That’s the big black spot tonight.”

Graham Arnold, the Head Coach of Australia, said that his team ran out of steam against a better team.

“Look, at the end of the day, they’re are a quality side. They are world champions for a reason. In the first half, we did well. In the second half, we ran out of legs a bit, but that’s the type of level those players play at,” the Aussie Coach added.