With the International Powerboat Federation (UIM) celebrating its 100th Anniversary this year, Abu Dhabi Marine Sports Club would like to mark the occasion with a double success. 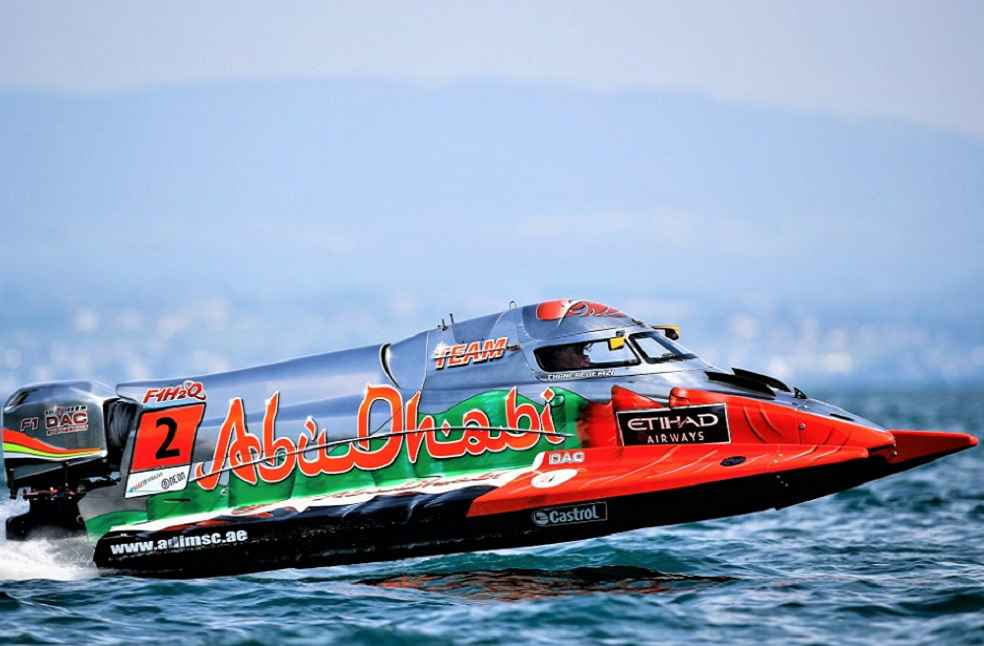 Macon Val de Saone, France: As the world prepares for the 2022 Campaign of the UIM F1H2O World Championship from the 3rd of June, Mr. Thani Al Qemzi and Mr. Shaun Torrente from Team Abu Dhabi are gearing up for the competition with determination to secure a double title triumph this time.

The Duo, perusing their 5th successive world team title arrived at the ancient town of Macon Val de Saone full of confidence. The drivers are fully prepared to once again challenge for the elusive Driver’s Crown which agonizingly slipped away from them in a dramatic 2021 season climax.

While Mr. Al Qemzi ended the 2021 season just a point shy of securing his 1st individual driver’s title, a blown engine in qualifying finished Mr. Torrente’s hopes of a 3rd success in a row as Mr. Jonas Andersson from Sweden secured the win.

Leaving the past in the dust, the Duo at Team Abu Dhabi is determined to make a flying start to the new season in the Grand Prix of France, with the boats taking to the Saone River circuit for an initial free practice session on 3rd June ahead of the big race on 5th June.

With the International Powerboat Federation (UIM) celebrating its 100th Anniversary this year, Abu Dhabi Marine Sports Club would like to mark the occasion with a double success.

A veteran on the grid, Mr. Thani Al Qemzi has been hunting for his maiden title for 22 years now. No driver has worked harder or gone closer without claiming the ultimate prize.

Partnering fellow teammate Mr. Torrente, a champion of the sport in 2019 and 2020, has only served to underline Mr. Qemzi’s self-belief, and the Emirati draws strength from the bond he has forged with the American in Team Abu Dhabi colors.

“Shaun and I are more like brothers than team-mates,” Mr. Al Qemzi stated, further adding that, “We work very well together. He is always ready to offer advice and support. We have a very good relationship and we believe in each other.”

Perusing his 3rd world title this season, Mr. Torrente remarked that, “The mood of the team right now is one of excitement. We’re excited to get going again. We’re excited to hopefully have a proper championship with multiple races, and excited obviously to be going for our fifth team title in a row.”

“And on top of all that, we’re excited to have the opportunity to bring back the driver’s championship again, with either myself or Thani,” Mr. Torrente concluded.

The Formula 1 Powerboat World Championship (also F1) is an international motorboat racing competition for powerboats organized by the Union International Motonautique (UIM) and promoted by H2O Racing, hence it often being referred to as F1H2O. It is the highest class of inshore powerboat racing in the world, and as such, with it sharing the title of F1, is similar to Formula One car racing. Each race lasts approximately 45 minutes following a circuit marked out in a selected stretch of water, usually a lake, river, dock, or sheltered bay. (Source Wikipedia)

GULF GENERAL: Meet the singing sensations of the Emirates