Spain is still in full control of its fate despite the draw with 4 points and sole possession of the group lead. 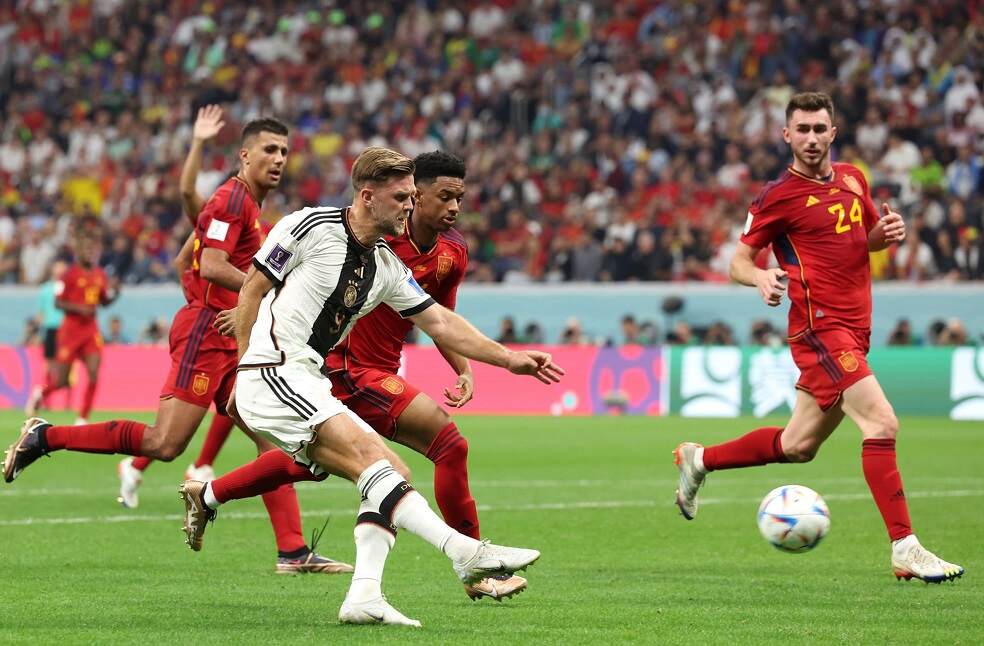 Qatar: Germany managed to keep their World Cup chances alive against Spain because of a late goal from Niclas Fullkrug, but they still need a lot of things to go their way to progress. Germans must beat Costa Rica to have a chance of going through but that still may not be enough.

Both teams came into the match in drastically different circumstances, with Spain leading Group E following a 7-0 thrashing of Costa Rica. Germany, who was last in the standings, was attempting to recover after an unexpected loss to Japan.

Spain is still in full control of its fate despite the draw with 4 points and sole possession of the group lead. Dani Olmo of Spain fired a shot from the edge of the 18-yard box in the 7th minute. However, German Goalkeeper Manuel Neuer deflected his strike off the underside of the bar. It was the closest La Roja came in the beginning to break the impasse.

In the 39th minute, Antonio Rüdiger appeared to give Germany the advantage by heading in a free kick. However, the goal was disallowed because the Germans were found to be offside. The team started pressuring early in the second half as they fought for their World Cup lives.

In the initial minutes of the second period, Spain struggled to leave its own half. Germany was given a free kick in a risky area in the 49th minute but squandered the chance. A costly error in the 55th minute forced Joshua Kimmich’s effort to be saved by Spanish goalie Unai Simón with his arms extended. Lvaro Morata, who came off the bench, made the difference for La Roja.

In the 62nd minute, the 30-year-old Spanish striker found the back of the net to break the deadlock and give Spain the 1-0 lead. Germany made a heroic effort to regain the goal. Jamal Musiala had a fantastic opportunity to tie the score for Germany in the 70th minute from the free-throw line. Simon, however, stood tall to create the block and fend off the Germans.

Finally, 20 minutes after Spain took the lead, Germany broke through. In the 82nd minute, Niclas Füllkrug beat Simon and squared the match late. Despite a few good scoring chances in the limited time left, both teams did not break the deadlock, and the game ended in 1-1.

In the next match, if Germany win and Spain lose, second place will be decided between Spain and Germany on group goal difference and goals scored. Germany would have to overturn a deficit of eight goals. There are numerous variations if Germany wins and Japan vs Spain ends in a Draw. If the score is 0-0, any win will be enough for Germany to qualify. If Germany wins by a single goal, the group goals scored would determine second place. Germany would finish second on group goal difference with Japan third if the team win by two or more goals.