Saruq Al Hadid, which means ‘Way of Iron’, was believed to be the center for metallurgical industries and commercial activities, and a crucial link to land and sea trade routes. 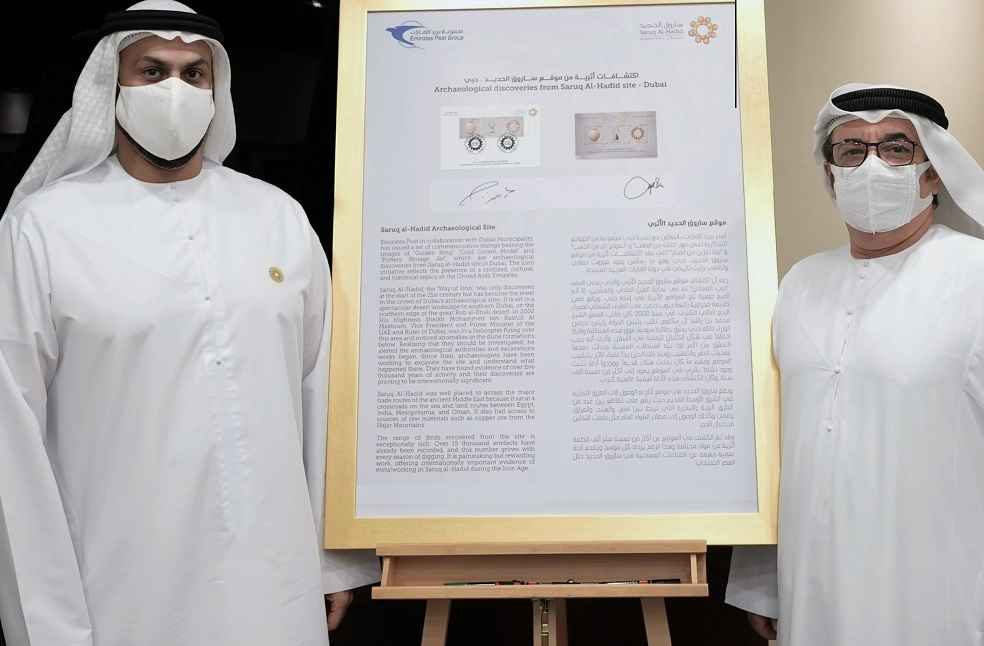 One of the most important and enigmatic historical sites in the UAE, the Saruq Al Hadid archaeological site will be represented on the stamps by images of a “Golden Ring”, “Gold Crown Model”, and “Pottery Storage Jar”, all of which signify the most prominent unearthed artefacts at the site.

‘Issuing these stamps is in line with our commitment to promote the country’s prominent historical and cultural landmarks. Through the stamps, we seek to raise awareness about this archaeological discovery and its historical significance as the region’s major hub for copper smelting and the manufacturing of various tools and utensils during the Iron Age. Archaeologists confirmed that the site’s human activity dates back to more than 5,000 years, making this discovery an invaluable addition to the region’s rich culture and history. Emirates Post Group will continue its efforts and contributions to highlight and preserve the country’s culture and heritage by using commemorative postal stamps as tools of documentation for future generations.’ Abdulla Mohammed Alashram, Group CEO of Emirates Post Group, remarked.

Meanwhile, Mr. Ahmed Abdulkarim Ahli, Chief Executive Support Services Sector, Dubai Municipality emphasized the importance of initiatives aimed at reviving and preserving the country’s national heritage. He said: “Dubai Municipality collaborates with several local institutions to provide consultations and services related to the protection of our local heritage. Various strategies and approaches are adopted to promote and preserve our traditional values ​​and customs.”

Furthermore, the Dubai Municipality Official stated that Saruq Al Hadid has become one of the most important archaeological sites in the Emirate of Dubai. The site was discovered by His Highness Sheikh Mohammed bin Rashid Al Maktoum, Vice President and Prime Minister of the UAE and Ruler of Dubai, when he noticed a difference in the shape of the sand dunes. Under his directives, teams of archaeologists conducted excavations and research at the site which revealed the historical importance of Saruq Al-Hadid. This breakthrough is considered the most important discovery in the Arabian Peninsula between the third millennium BC until the first century AD.

Saruq Al Hadid, which means ‘Way of Iron’, was believed to be the center for metallurgical industries and commercial activities, and a crucial link to land and sea trade routes.